The guys decided to do a workout with 10-pound medicine balls wrapped around their waists. 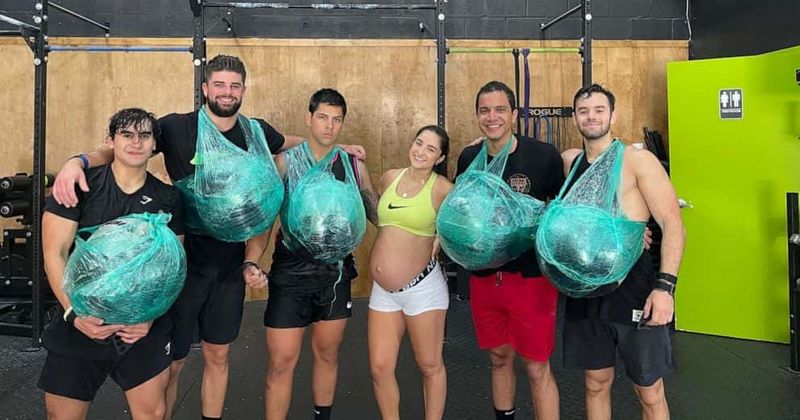 Michelle Duboc is one tough momma! Duboc is a CrossFit coach and co-owner of CrossFit Unbounded in Miami. While she was pregnant back in May she decided to work out with a couple of male CrossFit members (including her husband) at her gym while she was 40 weeks pregnant. The Murph Challenge as it was called is a workout that CrossFit members take part in every year on Memorial Day to honor Lt. Michael P. Murphy: a U.S. Navy SEAL who was killed in Afghanistan. This time the guys had to do the workout with 10-pound medicine balls wrapped around their waists. Why? It was done to understand the challenges of working out while pregnant.

"It was pretty cool to see them actually want to try it and to see kind of what it feels like," Duboc told Good Morning America. The video is fun to watch as you see all the men absolutely struggle to keep up with Duboc's challenge of a 2-mile run, 300 air squats and 200 pushups while the medicine ball is strapped around their waists. bps_23 commented: Lmfao this was awesome. You took them all out. fit_n_bald joked: 👏👏👏😂😂he gave birth at the end lol lol

"She's a motivational person at the gym well before and after her pregnancy," said Duboc's husband, Gian Franco Duboc, who came up with the medicine ball idea. Gian Franco who also coaches and co-owns Crossfit Unbounded beamed with pride as he spoke about his wife's dedication.  "Everybody around her in the gym just looks at her and if somebody's having a bad day and they don't want to work out, they just look at her and they're like, 'Damn, I can't complain.'" The motivational momma is all about supporting other pregnant women in understanding how important it is to move your body. Previously, she didn't want to post about her workout routine because of the negativity she would receive while being pregnant with her oldest daughter three years ago. But this time around, she wasn't going to let that stop her.  "It's so beneficial," said Duboc. "Working out is just so good for you. You also get those happy endorphins that we all need if going through a rough time in pregnancy."

Duboc has admitted that she's received a lot of negative comments about her workouts while pregnant.  "For a lot of people, it's like really embedded in their head, like women who are pregnant shouldn't lift [weights]," said Duboc. "And they hear it more like [pregnancy] is a condition. It's sad because they don't know all the benefits that come from working out during pregnancy." For anyone who wants to work out while pregnant Duboc advises to start slow. "Don't start something new if you haven't done it before," she said. The fitness expert also added they should continue pre-pregnancy workout routines if they had one. What's more incredible is that the day after the workout challenge, Duboc gave birth to her second daughter, Sky Duboc!