She referred to the copper-like substance on the implant as mold in a TikTok video. 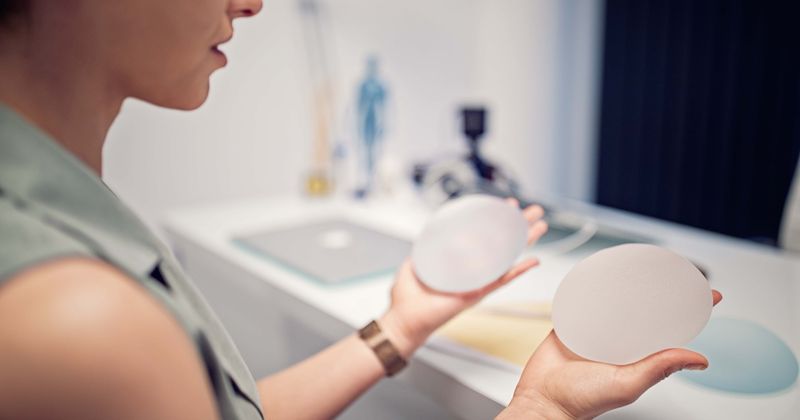 A woman showed her breast implants on TikTok after they were taken out from her body. Users are horrified to see the visuals.

The video was posted by Bunnie, @xomgitsbunnie, which displayed two plants with copper-like stains on them. She said that this copper-like substance is actually mold. Her video has reached over 2.3 million views on the social media platform. Bunnie shared that she had the implants removed in 2020 after she suspected that they were making her sick, reports Daily Dot.

She wrote in the text on the video, "I had implants in for 13 years. I started suffering so many symptoms that not one doctor could pinpoint. So I explanted in Nov 2020 & it was the best decision I ever made!" She added, "All symptoms went away, except anxiety sometimes."

She explained that the implants had been just lying around after she had explanted them. She said in the video, "Look at that. That goes inside of a human body. Look at the mold. No wonder why women are having so many complications with these things. It’s disgusting."

She alleged that she had been suffering from "breast implant illness." This term is not medically recognized but is used by people to describe all the symptoms they report after getting these implants. These are quite diverse in terms of their influence on the body and how long symptoms appear after implantation, making diagnosis challenging for doctors.

Jesus breast implant illness is terrifying. They need to warn people about this before they get them, wtf

According to Healthline, the symptoms of this include redness, swelling, pain, discharge, change in breast shape or color, and fever. Silicone-based implants can risk individuals developing auto-immune disorders the symptoms of which include, fatigue, cognitive impairment, arthralgias, myalgias, pyrexia, dry eyes and dry mouth.

It's uncertain if the reported mold in Bunnie's video played a role in her sickness because it's unclear whether the mold appeared before or after the implants were removed. However, many cases of mold developing on breast implants had been reported in the past.

A Florida woman went viral in 2014 after revealing mold growth in one of her saline breast implants. She alleged that the moldy implant made her gain weight and made her memory worse, per Daily Mail.

@KARISSAPUKAS amazing story in my local paper on Breat Implant Illness today! Censored her face and name for privacy reasons but so glad it’s finally getting some media attention 😊 pic.twitter.com/mUMoN1h3Ep

However, according to breastcancer.org, these symptoms can go away as soon as an individual gets the implant removed. Bunnie warned other TikTok users and advised them to be careful with breast implants.

She wrote, "Please make sure you talk to someone if you think [your] implants are causing breast implant illness. We don’t have to suffer in our quest for perfection babies."

In the comments section of her video, many people shared similar experiences. A user wrote, "I have seen so many people getting explants over the past year bc they had been sick for years w/random things & it was all bc of implants." Another user stated, "One of my really good friends just had hers removed cause she was having so many symptoms from them she said she wish she never got them."