Gaga told the legendary actor, "You see that? The public, they love you." 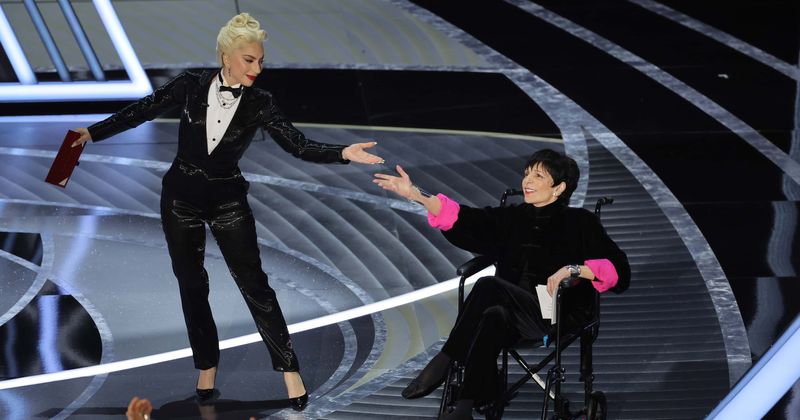 The 2022 Academy Awards was an event with a lot of controversies with people all over the world talking about the feud between Will Smith and Chris Rock. This controversial moment overshadowed a lot of warm and cheerful moments that happened during Hollywood's biggest night.

The exchange between Lady Gaga and Liza Minnelli during the announcement of the most awaited "Best Picture" award was one such moment that has moved people across the world. Minnelli was also celebrating the 50th anniversary of her film Cabaret which won her the Oscar for best actress.

This is like a lesson in how to facilitate older people while honouring who they are.
What a class act by @ladygaga with legend Liza Minnelli.
The conferred whispers of "I gotcha" "I know" picked up by the mikes make it especially touching.pic.twitter.com/2JOWyrTQxn

Liza Minnelli joined Lady Gaga on the stage to announce the nominees as a surprise presenter, reports USA TODAY. Minnelli sat in a wheelchair as Gaga stood alongside her and introduced her, and the crowd erupted in applause while giving her a standing ovation.

Gaga told the legendary actor, "You see that? The public, they love you." Minnelli then appeared to struggle with the sheets of paper she was holding and she muttered, "I don't understand." Gaga came to her help and said, "I got it," and took the House of Gucci star by hand.

She then proceeded to say, "Good evening. You know how I love working with legends. And I'm honored to present the final award of the evening with a true, show business legend." As Minnelli began to introduce the nominees for the Best Picture category, she started fumbling with words in between.

Gaga again came to her rescue and helped her along with the whole presentation. In the end, she again told Minnelli, "I got you" to which the actress replied, "I know."

Lady Gaga saying to Liza Minnelli “I got you” made me tear up on so many levels. #Oscars

People on Twitter are praising this sweet moment between the two music icons. A user Jamie Tunkel commented, "Lady Gaga telling Liza Minnelli "I got you" on stage at the Academy Awards in industry and society that so rarely takes care of its older women. My heart needed that. One day I hope someone will be there to say "I got you" too."

Another user Kevin Jacobsen said that this moment makes Gaga a good choice for hosting the Oscars next year. He wrote, "I honestly think Lady Gaga should host the Oscars next year. It's clear from her interactions with Liza Minnelli (and others over the years) that she has great respect for legacy, which is what the Oscars need more of, and she obviously knows how to work for a crowd. Lock her in now!"

It’s really amazing how preternaturally wonderful Lady Gaga is with her older colleagues who have a hard time with memory and cognitive function. The genuine care she’s taken with both Liza Minnelli and Tony Bennett is so heartwarming. pic.twitter.com/UJPxNtsVWH

This moment offered a contrast from the time when Smith went up on the stage and slapped Rock after he made an insensitive joke about Jada Pinkett Smith's hair. A Twitter user, Yishai Maynard wrote, "On a different night, Lady Gaga whispering “I got you” and Liza Minelli saying “I know” would be the story that stuck with people."