Platonic BFFs Marry Each Other To Raise A Family Together: "Friendship With Commitment"

The couple's TikTok video has stirred up a conversation about aromantic relationships and platonic love. 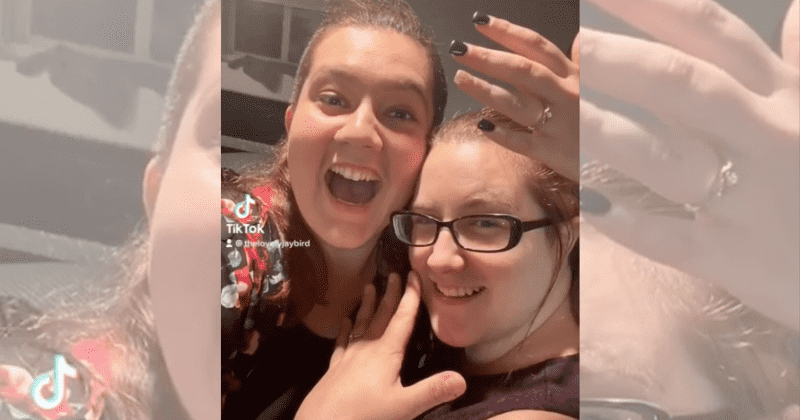 Jay Guercio, 23, and Krystle Guercio, 28, are taking the words "marry your best friend" seriously. The two BFFs have decided to spend their lives together and are now in a platonic marriage.  “My best friend and I of eight years got married… we did this because we wanted to raise kids together, we wanted to live our lives by each other’s side,” Jay Guercio said in the now-viral TikTok about her “platonic marriage.” She explained, “We act as a married couple does, but we don’t have the romantic or physical stuff.”

“Marriage is about so much more than the love you feel with someone,” Jay told The New York Post of her relationship. “I don’t feel that gushy, ‘I’m in love with you, I want to constantly be near you’ kind of romantic love. I feel the love that [one] typically feels for their best friends, times 100.”  The couple has always wanted to be adoptive parents. The two are now taking care of their 16-year-old foster son, Eddie. “He doesn’t deal with the fighting that happens among romantic partners, and he never accidentally walks in on anything inappropriate,” said Jay.

Jay and Krystle met back in 2012 at Long Island Gay and Lesbian Youth, an LGBTQ+ center. The two high school students hit it off pretty quick. “We started volunteering together, and she made me feel appreciated and cared for,” said Jay, who is currently a college student studying communications. Krystle is an assistant manager at an ice-cream store. What made them decide to head towards tying the knot? "Our goals aligned so perfectly,” said Jay. When Jay got out of an "unhealthy" relationship with a woman in 2019, she met Eddie through a friend, and over the next few months decided she would adopt him. “As one does, I called my best friend,” said Jay. “She said, ‘Hold on, let’s do this together.’”

The big day took place in November of last year. “It was less than 50 people,” said Jay. “It was mostly family.” The unconventional couple did take a traditional route with the with wedding gowns, rings and vows. “I want our relationship to be valued and taken seriously." Jay insisted, “This is my wife and partner.” Both of them identify “somewhere on the asexual spectrum,” Jay said. “We both experience romantic and sexual attraction to an extent, it’s just not for each other.” The two are also free to pursue flings outside of the marriage, though Jay said they both feel “satisfied with our dynamic.”

Platonic marriages are redefining what it means to "marry your best friend." https://t.co/2xjwsuO8AA

“A majority of people are still opting for that traditional idea of marriage where they marry the love of their life, someone they are also attracted to,” dating expert Maria Sullivan told Bustle. But more and more people are realizing it isn't the only way to share a life with a partner. “Marrying your best friend is a safe option for some,” Sullivan said, particularly if you’re more than ready to settle down, find financial security, or have kids. Jodi Erin Williams, MA, LPC, CST, a licensed professional counselor and certified sex therapist added that  “an aromatic marriage is friendship with commitment. It can have all of the features of a romantic committed relationship, such as sharing responsibilities, emotional support, and camaraderie,” Williams said, “but it lacks the romantic feelings that people normally associate with marriage.” Williams explained that “a lot of marriages have trouble because it can be work to keep romance alive." In romantic relationships, fights often stem from unmet expectations, cheating, jealousy, loss of interest, and other issues. But when partners in a marriage are platonic, that’s less likely to happen.