Woman Who Had 11 Miscarriages Is Today A Mother of 12 Children. Six of Her Kids Have Fetal Alcohol Spectrum Disorders.

She said she read and researched about how to meet the needs of these kids and provide them with a safe home. 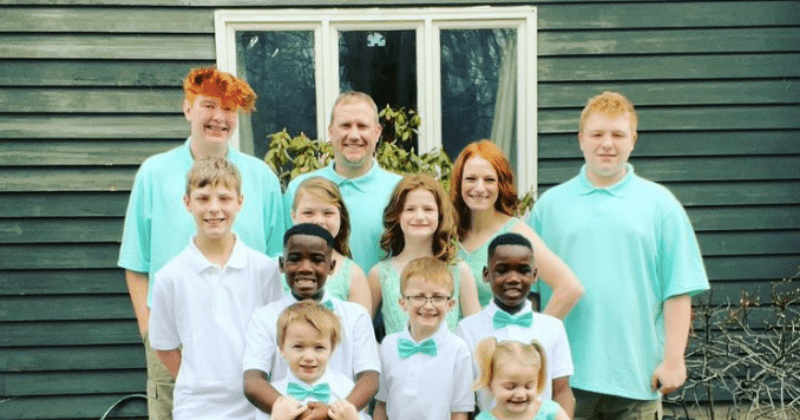 A mom of 12 went viral on TikTok after sharing her elaborate meal prepping for her children.

The family, known as "Dougherty Dozen" on social media, has adopted two more children since they went viral. They had 10 before the video made its way to social media. Alicia Dougherty had officially six children and all of them suffer from Fetal Alcohol Spectrum Disorders (FASD). According to CDC, "These are a group of conditions that can occur in a person who was exposed to alcohol before birth. These effects can include physical problems and problems with behavior and learning." It happens when alcohol in the mother's blood passes onto the fetus during pregnancy.

Alicia spoke to TODAY, "These kids tend to have very poor executive functioning skills. Ours have explosive rage, anger issues, and trouble with transitioning. There are many, many meltdowns." She added, "Socially and emotionally they’re not the same age as they are chronologically, so they don’t understand the social cues of their peers."

Alicia lives with her husband, Josh, in Pittsford, New York. Josh and Alicia Dougherty endured infertility and 11 miscarriages after marrying in 2003, prompting them to decide to adopt their first child, Alexander. He is now 16 but they adopted him when he was just 5, per MSNBC. Alicia recalls how he was extremely angry and threw a rug at her down the stairs. She said, "We were like, ‘What did we get ourselves into?' " She added, "But we refused to give up. So we dove headfirst into researching and reading about FASD, and trying to figure out how to best meet his needs and little by little, he began to trust us."

Alexander is still not like a typical teenager and that is pretty common with children with FASD. The home of the Doughthertys became an ideal home for children with this disorder. She said, "People quickly realized that tantrums didn’t faze us. So the phone kept ringing." They went on to adopt Alex, James, 15, Patrick, 13, Bree, 11, and twins Jordan and Jason, 7 years old. They also have four biological children, Zoey, 10, Dashel, 8, Bodhi, 5, and Harlee, 3.

Their child James has also been diagnosed with Post-Traumatic Stress Disorder on top of having FASD. However, Alicia is extremely patient and it comes from growing up with a brother who had bipolar disorder. She said, "I’m used to being around random crying and big emotions. It’s my norm, it doesn’t bother me at all." Josh is also trying his best to be a great father figure. He grew up with a single mom who worked three jobs. So, he "loves having this big family that’s always together."