Scooter Hightower wanted to do something special for his mother on his wedding day while she was still alive. 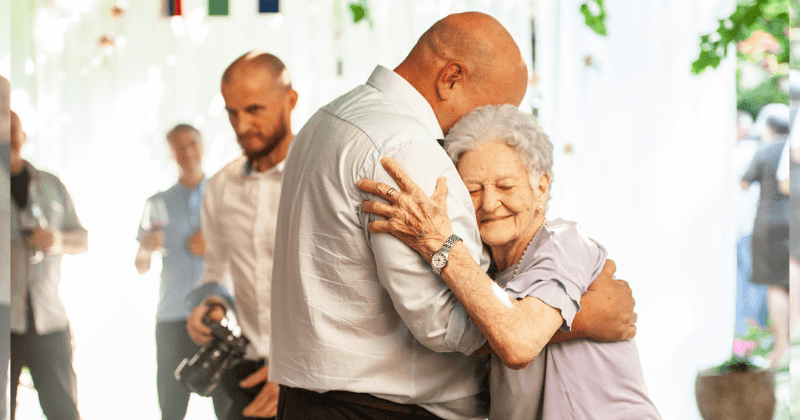 A heartbroken Middle Tennessee man has shared a video of the special mother-son dance moment during his wedding to help raise awareness about Amyotrophic Lateral Sclerosis (ALS). Scooter Hightower wanted to do something special for his late mother, whose last wish, according to Fox 17, was to attend her son's wedding ceremony in Arrington. "I was wanting to do something really special for her because one of the things is when she was diagnosed with ALS, she was waiting for two things in her life to happen, before she wanted to go to the other side so to speak. She was waiting for her granddaughter to be born, my niece, and she is going on six months now, seven months, and then she was waiting for our wedding. She wanted to be at our wedding," he said.

It was not until a week before his big day that Hightower decided to dance with his mother on a song by local artist Thomas Finchum, called "Mothers." Understandably, choosing the song was tough for Hightower as he knew how important this auspicious ceremony was to his mom, whose days were tragically numbered. "It took me up until the Saturday before our wedding to pick out a song because it was just tough. I was trying to find that right song. I actually had to show my sister the song to be able to pick that one because I just couldn’t do it by myself," he recalled.

On his wedding day, Hightower's mom stepped out of her wheelchair with the help of her son and her husband to dance to the song. Soon they were joined by children and there was not one dry eye in the room. "My plan was to pick her up out of her chair. She didn’t have the strength to stand. My father helped me get her out of her chair. I held her up. We stood there for probably 30 seconds while I was holding her and dancing and once we sat mom back down in her chair, all of her kids come up to be around her because I wanted it to be a special moment for her. She never really got all of the kids around very often and she always loved to. I wanted to make sure she knew that all of her kids were there with her and loved her," he added.

Then last month, she sadly passed away. Fifteen ambulances arrived to escort her to the church, in honor of her work as a paramedic for nearly three decades in Tennessee. "We had a last call for mom over the radio that went through the hospital. Everybody in the hospital heard it. We had a flyover from LifeFlight, MedEvac. You know, everybody knew her. She changed so many lives," he said. "It’s incredible. I can’t even begin to scratch the surface on how many people she impacted in her life because she was impacting millions of people before I was even thought of." Hightower says that the video of the beautiful dance with his mom "means everything" to him. "I would cherish that video for the rest of my life. I can’t even really put it into words what it means to me because it’s just, it’s everything," he added.

(2/2) We are grateful to everyone living with ALS (and their families) who volunteered to participate in the trial.

Making sure that her memory lives on and more people are made aware of the disease that took his mother's life, Hightower shared the video on social media and it immediately went viral. He assured victims of this "disgusting disease" and their families that they are not alone. Speaking about the unexpected response, Hightower continued, "It’s crazy the impact it’s had on all these other people that are reaching out to us from all over the world. It’s Australia, New Zealand, Argentina, Brazil, South Africa. We have people all over the world reaching out to us. It’s impacting their families as well."

"This video to me it’s everything. It’s not only helping me get through the tough times me and my family are going through, but it’s helping other people realize what ALS is," he said advising the families, "Don’t be afraid to reach out and talk to somebody. Don’t bottle it in." According to Mayo Clinic, ALS is a progressive nervous system disease that affects nerve cells in the brain and spinal cord, causing loss of muscle control. It often begins with muscle twitching, weakness in a limb, or slurred speech, and eventually, it affects the control of the muscles needed to move, speak, eat, and breathe. It results in a person's inability to walk and go about their everyday chores easily. Unfortunately, there's no cure for it as of now.