people soul health parenting trending celebrity fitness relationship lifestyle
Illustrator Beautifully Captures The Joy Of Being A Single Woman: "They Are Not Depressed Or Crying"

Illustrator Beautifully Captures The Joy Of Being A Single Woman: "They Are Not Depressed Or Crying"

The artist uses her drawings to battle the stigma attached to being alone. 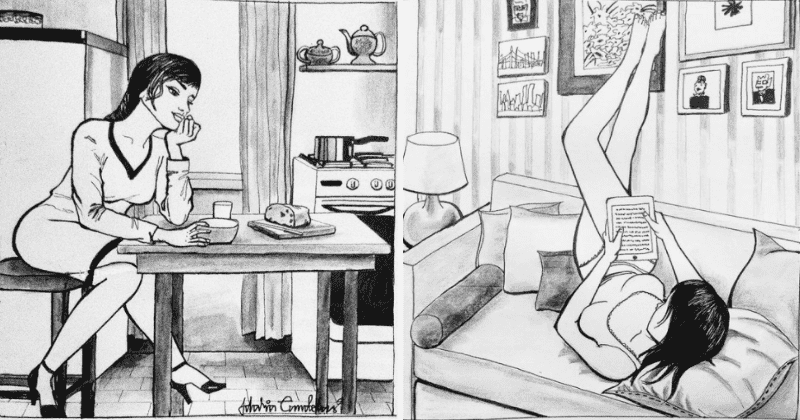 Why are we afraid to be alone? And if we're not, why are we shamed for choosing to be so? Some people enjoy their own company; they love their freedom. Shouldn't that be celebrated? Many folks enjoy fulfilling lives on their own and don't always need a partner. But society often can't wrap their heads around the concept: surely, a single woman must be lonely, miserable, and crying all the time? Mexico-based artist Idalia Candelas is battling the stigma around solitude through her Postmodern Loneliness art series that depicts women who have no qualms about being alone.

The artist went on to publish the Postmodern Loneliness series in the form of a book titled A Solas—which translates to 'On my Own'. Many people could relate to her and the book was a huge success. "The theme of loneliness has been recurring in my drawings," Candelas explained to Mic. "Even though people try to avoid [it] [out of] fear, being in that situation is increasingly common in our society. I like to show women who exist in solitude but do not suffer. They are not depressed or crying. Rather [they] are safe, exalting in the sense of enjoying the company of just herself." It's also important to note that some people feel lonely even with people around them. Feeling content in life has more to do with how you feel about yourself rather than how others make you feel, right?

Research suggests that spending alone time can actually be good for you. An Australian study in 2015 noted that traveling alone often results in "personal feelings of freedom, relaxation, and discovery." There's also research published in the Journal of Population Research in 2019 that agrees, reports Psychology Today. "Drawing from Canadian surveys conducted between 1996 and 2010, [Jianye Liu and his colleagues] focused on 6,675 people who were living alone when they were first contacted, and then followed up on their living situation for each of the next six years," wrote social psychologist Bella DePaulo. "The people more likely to continue living alone over the entire six-year period were the women. It was as if once they got a taste of a place of their own, they found that they really liked it. They no longer wanted to find someone to live with, if they ever did."

If you'd like to buy a copy Candelas' book, A Solas, you can do so here. Check out some of her illustrations below: