Bradley Cooper Brought His Mother As His Date To The Oscars

Many other A-list celebrities attended the awards with their family and relatives. 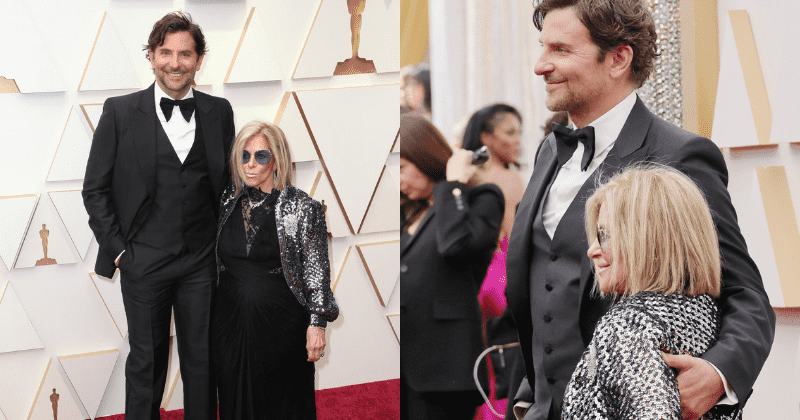 Usually, celebrities bring friends or their significant others as their dates to the Oscars. However, this time, many stars including the actor Bradley Cooper chose to bring their family members, reports TODAY. Cooper's mother, Gloria Campano, walked the red carpet wearing a floor-length black dress and a silver sequined blazer. She opted for a pair of black flats and a pair of blue-tinted sunglasses for added comfort. Cooper wore a black Gucci tuxedo and embraced his mom as they posed for the photographer, reports Harper's Bazaar.

“My mom’s funny because she always thinks everything’s going to be a huge hit.” Bradley Cooper talks to @WillieGeist about his relationship with his mom, “A Star Is Born” success and what his late father would think of where he is now #SundayTODAY pic.twitter.com/gJuczA9sME

Campano had appeared on the Oscar red carpet in 2019 with her son and his then-girlfriend, Irina Shayk. All of them wore beautiful black outfits and posed for pictures together. The same year, Campano made an appearance at the Screen Actors Guild Awards along with Copper. She wore a black dress, flats, and tinted sunglasses, similar to her outfit this year. The mother and son share a very close and loving bond. Cooper spoke about their relationship and how he cared for her during the COVID-19 pandemic, in an interview with Harper's Bazaar.

He said in the 2020 interview, "I'm with my daughter and my mother and my two dogs, and we have not left the house. My mother is going to be 80, and she has a colostomy bag, so I can't let anybody in the house. And I can't leave the house, because if she gets it, it's over." He also spoke about his mother in a 2019 interview with TODAY's Willie Geist, "My mom’s funny because she always thinks everything’s going to be a huge hit."

The Haim sisters have arrived to the Vanity Fair #Oscars after party pic.twitter.com/F4Si2jEMPI

Cooper wasn't the only one spotted with family members during the awards. Halle Bailey, a presenter for the Oscars, brought her sister Chloe Bailey as her date. Alana Haim, who made her acting debut with Licorice Pizza, brought her sisters Este and Danielle. She has a pop-rock band named HAIM with her siblings and they've also made an appearance in her debut movie. The pop-star Billie Eilish attended the Oscars alongside her brother, Finneas O'Connell. They both have been making music together and performed their Oscar-nominated song, No Time To Die, at the event.

Judi Wench, the legendary British actress, brought her grandson, Sam Williams. The duo is known for several TikTok videos they made together during the pandemic. Dench spoke to Channel 4 News, "Well, it saved my life. I know nothing about TikTok. Sam is the person who is technically minded and who has all the ideas, so he got very strict."